First, I drink the Coffee... 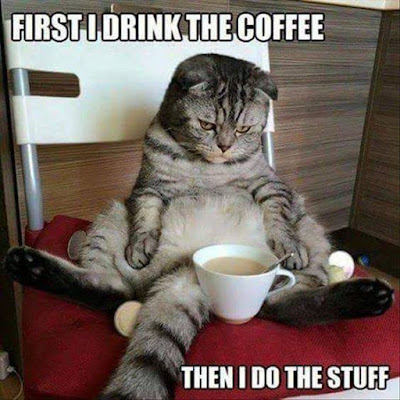 But which stuff do I start with? There's the do-the-dishes stuff, and the clean-up-after-the-kittens stuff...not to mention the go-to-the-store stuff.

Hey...I got my name in the Statesman...I costumed a play called Doubt, A Parable, at City Theatre, and it got a nice review from Andrew J. Friedenthal, which made my day. Here's the text, as I have learned these links don't work forever: 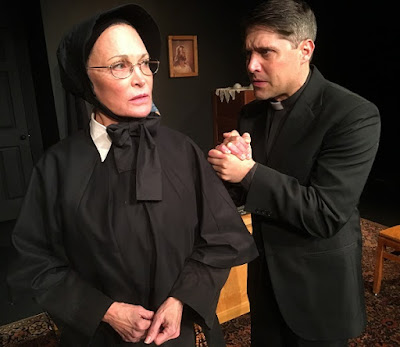 Before it was adapted into the award-winning 2008 film of the same name, playwright John Patrick Shanley’s “Doubt: A Parable” was an award-winning 2004 stage play (specifically, it won the Pulitzer Prize for drama and the Tony Award for best play). The straightforward, naturalist drama explores the struggle between Sister Aloysius Beauvier, the head nun and principal at the fictional St. Nicholas Church School in the Bronx, and Father Flynn, the progressive parish priest whom Aloysius suspects of sexual misconduct with one of the school’s boys.
Set in 1964, “Doubt” explores a time where the abuses of the Catholic Church were unseen and unheard by the public, kept quiet by a paternalistic theocratic system that was more interested in protecting its members than its parishioners. Though the rash of sexual abuse within the church has since been revealed (and was public knowledge at the time the play was written), the larger problems the play underscores resonate more than ever in the #MeToo era, as a dynamic new production of “Doubt” from the City Theatre shows us.
In many ways, “Doubt” is an exploration of female resistance to an abusive male power structure, utilizing informal networks and outside-the-system tactics in order to get around a set of rules designed to keep men unaccountable to women who see them do harm. It is also, however, a look at one man and one woman who are rock-solid in their beliefs about right and wrong, and what happens when those two conflicting belief systems meet.

Roemer knows that the caliber of actor here is what makes the production, and so he keeps everything else simple (with impressively natural lighting design from Andy Berkovsky and Kari Perez, and time-and-place-setting costumes by Ronni Prior and scenic design by Desiderio Roybal). The scenes of confrontation between George and Gross are positively electric, creating an immense aura of frightening tension simply through the skilled performances, bereft of any fancy stage tricks. Similarly, the clearly expressed internal agony of Brooke Culbertson as Sister James, a young nun torn between these two authority figures and unsure of whom to believe, provides the perfect surrogate for the audience, equally eager to escape from the room as we are to get to the truth.

Ultimately, “Doubt” intentionally leaves us with more questions than it does answers, as regards both the events of the play and the larger culture this parable is discussing. In a year in which we hear impassioned pleas in defense of the victims of sexual assault as well as in consideration of those who might be falsely accused of abuse (a rare occurrence for the level of concern it evinces), “Doubt” resonates perhaps even more today than it did 15 years ago. The only thing not in doubt is the high quality and stunning performances of City Theatre’s production.

Many thanks to Austin 360, The Statesman and Andrew J. Friedenthal!

So yea.  Despite fluctuating font sizes, here it is!  I'm chuffed.

Now, procrastination time is over, and I have stuff to do...