Clothes for the Old Lady

The list of things I won't wear gets longer and longer as time goes on.

Some years ago, I caught a glimpse of myself in a satin shirt, and said, "Oh, no.  Not even."  That was the last time I wore anything shiny.  I will do sparkly, on occasion, but shiny is out.

My friend Jeannie Loving told me, after getting her Colours done (when that was a thing) (she's an Autumn), that the lady told her, if you wear a 14 or larger, you shouldn't wear small all-over prints. As I wax ever larger, I see the truth of that.  In a small print, I look like ten pounds of flour in a five pound sack.

Horizontal stripes went the way of shiny things, at about the same time.

I particularly dislike the knit tops that are printed after being assembled, leaving white gaps where the fabric was folded.  Why is that even a thing?

I like loose clothes, so I buy a size or two larger than some friends think I should.  I have always run with the idea that just because I can pour myself into it doesn't mean it fits.  If it's uncomfortable anywhere, our relationship is over.

There was a brief, shining summer, back in maybe 1975, when I wore a French bikini.  These days, Victorian "bathing costumes" are starting to look pretty good.

I have found that longer tops make me look less like an egg, so they are in like Flynn.  Belts are out...there's no point in putting one on Humpty Dumpty. 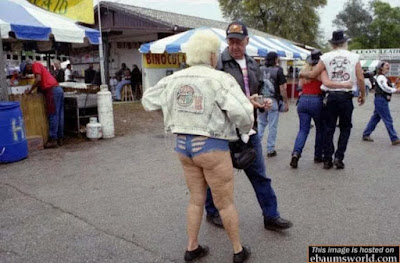 The first time I saw this image, it was captioned, "Eventually, there comes a time when you have to hang up the Daisy Dukes."  While, in theory, I subscribe to the idea that anyone should wear what they damn well please, I feel the need to draw the line somewhere.  I always wonder what she has on top, under the acid-washed jean jacket.  The man standing in front of her is seriously perusing whatever it is.  She has courage, I'll give her that!