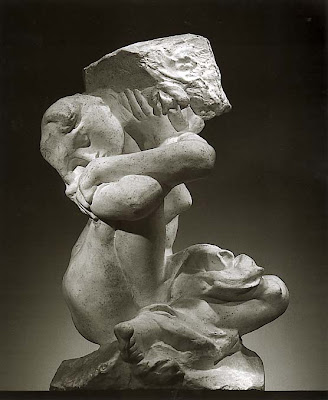 Here's the passage about Rodin's
"Fallen Caryatid Carrying Her Stone"
- from Robert A. Heinlein's
Stranger In A Strange Land:

"This poor little caryatid has fallen under the load. She's a good girl - look at her face. Serious, unhappy at her failure, not blaming anyone, not even the gods... and still trying to shoulder her load, after she's crumpled under it.

But she's more than just good art denouncing bad art; she's a symbol for every woman who ever shouldered a load too heavy. But not alone women - this symbol means every man and woman who ever sweated out life in uncomplaining fortitude until they crumpled under their loads. It's courage... and victory.

Victory in defeat, there is none higher. She didn't give up... she's still trying to lift that stone after it has crushed her... she's all the unsung heroes who couldn't make it but never quit."
Posted by Ronni at 9:33 am