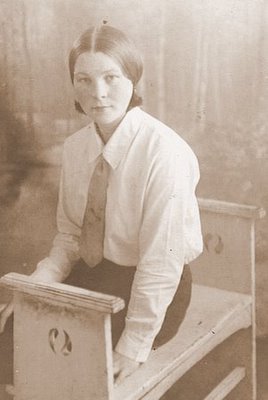 Here's my birth mother, taken at about the time she met my birth father. 1927, I think. She was looking around for something to do for a year, until she was old enough to enter nursing school. My father had advertised for a governess, as he and his wife, Rinchen, had four children, and Rinchen was very ill with TB. My mother got very attached to the children. When Rinchen died, my father told my mother that the only way he could keep her on was if she married him.

She never did go to nursing school, but spent her retirement volunteering in hospitals and retirement homes, working for Meals on Wheels and assisting elderly people on holidays.

She raised his four children, and had five of her own with him. She later told me that the only thing she could remember their ever having agreed on was the necessity for putting me up for adoption. I ws the youngest; she was 40 and he, 60 when I was born. They were very poor, as he had a heart condition and couldn't work.

She was a strong and unusual woman, and I am very glad I carry her genes, and even more glad that I got to meet her.